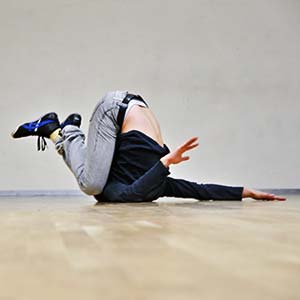 “Fake – the real deal” is an installative work that explores near future speculations in a dark room. The senses are orchestrated and manipulated, while temptations open options. The performers are voices, mostly without bodies that discuss the hot topic of the dance of the future, from their own perspective in the near future. Partly computer-generated voices, partly organic, or mostly organic and partly artificial, or fully organic and fully artificial, are the different levels of hybridisation in this cast. The voice of the elevator and Siri are trying to predict the future of dance, while some of the other voices are attached to body parts that used to dance and are still talking about their experience. The arrangement of words and sounds will compose a score of pleasure. Orgasmic voices and organic noises will be the texture of the dance. What will be visible is a matter of perspective.